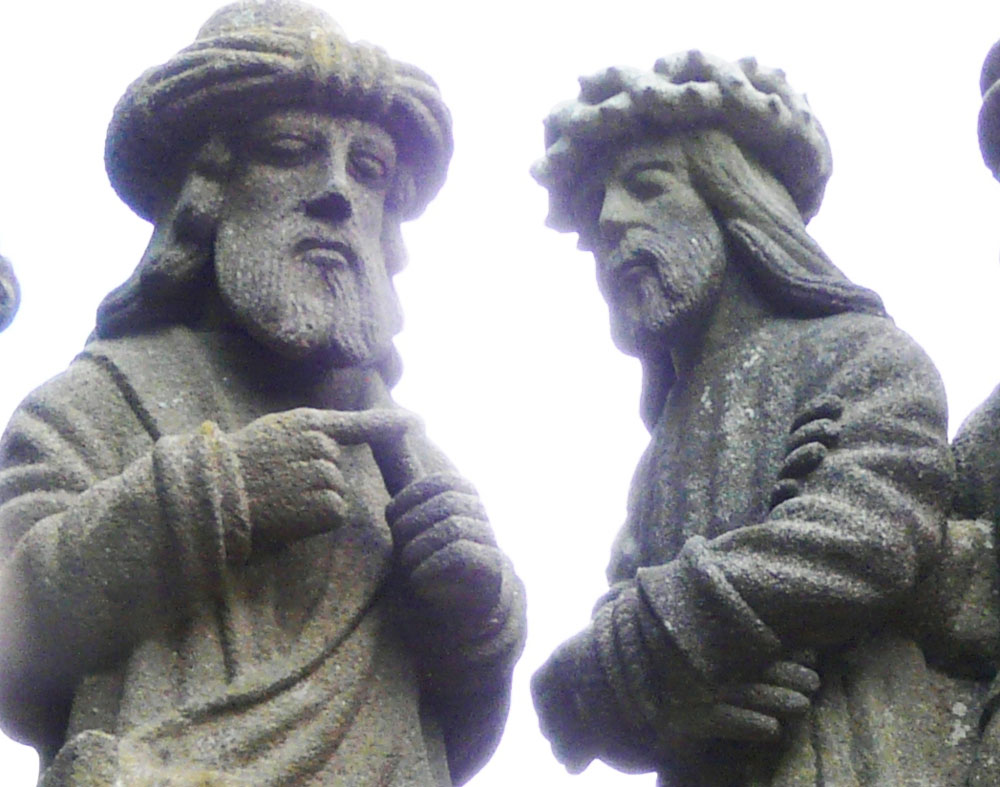 18:33   So Pilate went back into the Praetorium and called Jesus to him and asked him,

'Are you the king of the Jews?'

or have others said it to you about me?'

who have handed you over to me: whathave you done?'

my men would have fought to prevent my being surrendered to the Jews.

As it is, my kingdom does not belong here.'

Jesus answered, 'It is you who say that I am a king.

I was born for this, I came into the world for this, to bear witness to the truth;

and all who are on the side of truth listen to my voice.'

'Are you the king of the Judaeans?' In the context this is a surprising question. Those who brought Jesus to Pilate called him an 'evil-doer', not a 'king' (18:30). And Jesus was sentenced to death by the Sanhedrin (High Court) because of what he preached, not because he said he was a king (18:19). The last time we heard the word 'king' in connection with Jesus was on the occasion of his royal entry into Jerusalem a week ago, six chapters earlier(12:13.15). So, Jesus' counter-question is more than justified, 'Do you ask this of your own accord,?'

According to the Greek text, Pilate is 'calling' Jesus, not simply 'talking to' him; he 'gives voice'. In the end, Jesus will say, '...whoever comes from [lit. out of] the truth hears my voice.' There the Greek gives 'call' again. So,this piece of text goes from Pilate's 'call' to Jesus' 'call'. A surprising framing.

That sheds new light on Pilate's question, 'ARE you the king of the Judaeans?' By using the verb 'to be' expressively, Pilate refers to the other dimension. He illustrates it by using the same word for himself, 'AM I a Jew?' No, he is not. He doesn't take part in the mystery of divine' being'.

But Jesus' kingdom does, 'My kingdom IS not out of the world!' Some moments later Pilate asks Jesus, 'So, you ARE king?' And Jesus' answers, 'KingI AM!' Isn't it as if he uses the name of God here, 'I AM', connecting it with the word 'king'?

In the context of John's Gospel, the word 'out of' is full of meaning. It refers to the origin of 'being'. In John's Gospel one of the most important questions is 'Where is he from?' (1:48; 2:19; etc.). This question is reflected in the word ‘out of'. Remember how in his first chapter John writes that children of God are not born 'out of' blood, nor 'out of' the flesh, nor 'out of' the will of man, but 'out of' God'(1:13). And in the conversation with Nicodeme, Jesus says, 'What is born 'out of' flesh, IS flesh, and what is born 'out of'spirit IS spirit' (3:6). (Here, the two different ways of 'being' are placedopposite each other).

This sculpture is a part of a so-called 'Calvaire'; it dates from 1604 and it is to befound in Plougastel, Brittany, France.

Pilate is confronted with Jesus. Pilate, the representative of the Roman Empire, is seated and wears a hat that refers to his dignity. Jesusis standing upright and wears a crown of thorns. Certainly not a king according to the measures of our world. Both are more or less of the same height.

Pilate is counting the arguments he is giving on his fingers: in medieval art this is a very common way to expressthe fact that he is speaking in a discussion. Jesus has his hands bound before him; they almost touch the left arm of Pilate. He doesn’t seem to say anything. Of note is the effect of the pleat of the garment on his left arm: it looks as if there is a third hand. In spite of Pilate's gesture, it looks as if they aren't speaking at all. There is an atmosphere of silence between both of them. A sense of mystery.

What is in the silence between these two men? I try to express it in words. Perhaps I could even write the text of a play or of a radio play...?