Diaconate ordination: being ambassadors for Christ

A group from the Colegio Seminario, Uruguay, who were at the boarding school in Lancashire as part of an exchange programme, attended the service. They were accompanied by Pablo Michel SJ and Maria Ines Berasain; and, for the occasion, Fr Marcelo Coppetti SJ, rector of the Colegio, was also present. Maximiliano’s parents arrived from South America as well, while his brother and nephew travelled from Scotland to join the celebration.

“Ordination to the diaconate is not stepping up,” said Bishop Arnold in his homily, “but it’s a stepping down, in the service of other people.”

The Gospel passage for the day told Jesus’ call of the Twelve and His instructions to set off to proclaim repentance. Vocations and service to others were the main focus of the homily.

Bishop Arnold described Jesus’ appearance on the Road to Emmaus as an example to accompany and explain the Good News to others. He also referred Pope Francis’ words to the Bishops of South America, during World Youth Day: “you all have the courage to go out there and walk with people even when they are walking away from the Church.”

Addressing both Maximiliano and the students, the Bishop highlighted more than once how “each and every one of us, as Christians, are called to be missionaries to others. We are responsible one for the other. You can’t just leave it to bishops, and priests, and deacons throughout the Church...We are the Church. All of us are called to be nothing less than ambassadors for Christ.”

He concluded with renewed congratulations to Maximiliano, and a final remark on the important role faith assumes in decision making and in pursuing our call.

The service was accompanied by the Stonyhurst College choir. After Communion, some of the students from the Colegio Seminario united their voices to sing a wonderful Nada te turbe.

Fr Tim said that he was moved by the way in which everyone, but especially the students engaged with the Mass: "many were touched by Max's parents bringing the vestments to the bishop for him to bless."

As part of this Jesuit formation, he studied philosophy at the Colegio Máximo San José and Theology at the Pontificia Universidad Javeriana in Bogotá, Colombia. Maximiliano, who belongs to the Argentina-Uruguayan Province, is currently in the UK to study an MA in Religious Education at the Institute of Education in London.  He is a member of the St Ignatius community at Stamford Hill, north London, and helps out with the parish, particularly with the large local Latin American community.

Please, remember him in your prayers. 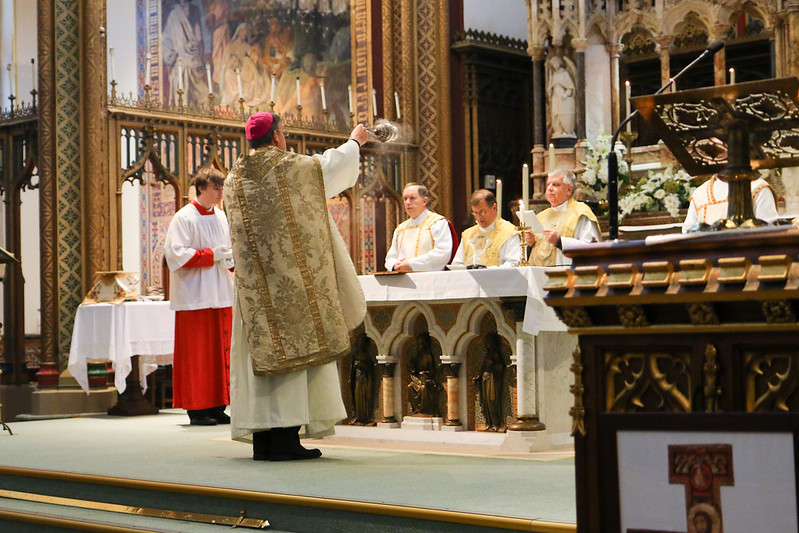