The last Sunday of April is always a big day in the London calendar and this year 42,000 runners embarked on the 26.2 mile challenge of the London Marathon.

Among them the Jesuit team included four runners for Jesuit Refugee Service, including JRS Operations Manager Aidan Cantwell (5:25), and 26 for Jesuit Missions, of whom no fewer than twelve are teachers in our Jesuit schools.

First home in 3:44:32 was English teacher Ruth Freer from St Aloysius College in Glasgow.  Not far behind her was JM Communications Officer Stephanie Beech running her first marathon in 3:51 – “it was an amazing day, the support was unbelievable,” she said.

Stonyhurst College fielded a team of six.  Katie Marshall completed the course in 4:06. “It was wonderful to have so much support,” she commented, “at one point I spotted a group of my former students all calling out “Mrs Marshall!” I was so delighted to see them, but I couldn’t stop for a catch up!”
The parents of fellow-teacher Julie Greenwood travelled down from their home near Blackpool to support Julie and managed to cheer her on at four different points around the course.  Julie sustained a knee injury at around mile 17. “She said to me – Mum I can’t go on”, recalled her mother, but, helped by another runner, she persevered to complete the challenge.  Also troubled by pain was Shirley Russo, this year’s outstanding fundraiser, from St Wilfrid’s Jesuit parish in Preston. Despite suffering a leg in jury about half way round the course Shirley completed in just over six hours, having raised a massive £3,300.  “I was just glad to finish and not let down all my supporters,” she said.

Richard Hargreaves, a Stonyhurst old boy, bravely donned the Jesuit Missions Womble costume, along with JM marathon regular John Jackson.  The two ran together in the respectable time of 5:32. “You certainly get a lot of attention when you’re a Womble!”, they observed.

Kennie McKie, who travelled from Glasgow where he is Chair of the parish council at St Aloysius Jesuit Church, completed his first marathon in 4:41.  Kennie exceeded his fundraising target, reaching £2,700 so far. “The response from the parish and all my friends and family was tremendous,” he said, “and I think my efforts have raised the profile of Jesuit Missions at St Aloysius, and especially the work they do for suffering people in South Sudan.  I expect a few people might think – “if he can do it then so can I” and JM may get a few more Glaswegian runners coming forward.”

Absent from the final line up were Fr Kyara Corbinian SJ and Fr Alexander Wainaina SJ from East Africa, whose visa applications were initially turned down.  JM Director Paul Chitnis said, “I was very disappointed that the two African Jesuits had been denied visas. I contacted my MP and four government ministers expressing my anger and asking for the decision to be over-turned. After 48 hours it was, but sadly not in time for the bureaucracy to be completed. The two Jesuits were colleagues of Fr Victor-Luke Odhiambo who was murdered in South Sudan last November and in whose memory our runners were participating.’

Jesuit Missions hopes to raise up to £50,000 from this year’s marathon to help fund a new teacher training college in Cuiebet, South Sudan, which Fr Victor-Luke was planning at the time of his death.

It is not too late to show your appreciation of the efforts of all the runners and to support education in South Sudan, which has one of the lowest levels of secondary education in the world. 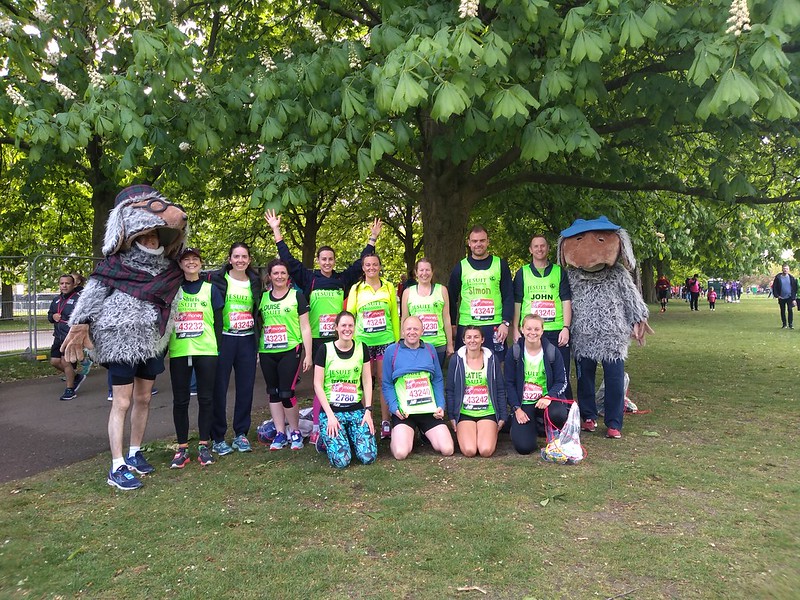