The small community of St Ignatius village near Lethem in the Guyanese interior hosted a once in a generation event last week.  This was the much-heralded pre-synod consultation meeting of the eastern region of Amazonia.

Pope Francis announced the Synod on the Amazon in January, after expressing grave concern for the indigenous peoples and the ecology of the region.  The pope appointed a pre-synod council to prepare consultation documents which are analyzed to inform the synod working documents and agenda.

The pre-synod meeting of the eastern region of Amazonia is part of this consultation process and the Jesuit parish of St Ignatius Lethem in the Rupununi in the interior of Guyana was chosen as the location.

The Jesuits in Guyana had led the consultation process with over fifty remote indigenous communities. Each village sent delegates to attend the three-day meeting in Lethem which was led by Cardinal Pedro Baretto SJ, Archbishop of Huancayo Peru, the papal nuncio Archbishop Fortunatus Nwachukwu, and the bishops of the “three Guianas”: Francis Alleyne OSB, Bishop of Georgetown Guyana, Karel Choennie, Bishop of Suriname and Emmanuel Lafont Bishop of Cayenne, French Guiana. The church dignitaries were all presented with elaborate feather headdresses and garlands which they wore for the opening mass and meeting.

Fr Jim Conway SJ returned to Guyana to attend the meeting, having served the Rupununi people for the previous five years. He explained how, in the weeks leading up to the meeting, the community of St Ignatius village built a traditional meeting house known as a benab.  “Its structure is supported by a tree trunk which took 40 men to carry out from the forest, and once it was finished the benab was inaugurated in style with a traditional blessing by Eva, a Macushi woman using a special incense made from tree bark and gum to invite the good Spirit to dwell within for the duration of the meeting.”

The blessing was followed by traditional dancing, and a procession to the nearby St Ignatius Church for Mass. In his formal welcome the village toshao (chief) said, “it is a great privilege for the village to host this meeting, it is a great way to bring everyone together.”

Mauricio Lopez, the Director of REPAM (Pan Amazonian Catholic Churches Network), reminded participants of the background to the meeting in the Pope’s visit to Peru in January, and the consultation process to date, in which this meeting is one of 45 taking place across Amazonia. He described the 30 questions asked during the consultation: questions about identity, traditions, land, and fears for the future.

It was then the turn of the community delegates to speak.

“That was really the most powerful part of the meeting” observed Fr Jim, “in really hearing and understanding how  anxious people were for their future – fear about what was happening to their land and their water supply as a result of mining depredations; fear for their children’s health as illnesses linger and cuts take longer to heal; anxiety that their children are embarrassed to speak their own tribal language when they move to cities, how they don’t fit in there.  There was a call for more mother-tongue bilingual education – extending it to all indigenous language groups.”

“We heard a story of a father who went away to work in a gold mine, but he wasn’t paid, and had difficulty returning home.  A woman spoke about how the leatherback turtles are losing their nesting sites at Sand Beach because of sand erosion and sea pollution. Some felt that the Church did not speak up enough in support of indigenous peoples’ rights, and  against corruption.”

“I remember particularly one heartfelt lament “we have given our tradition away and we cannot get it back; we were bought by things which we thought were important but found that they were not!””

Fr Jim felt the principal achievement of the meeting was that people were brought together in solidarity: “people love being together, and they felt they had been heard.  They felt happy that Pope Francis had shown them special attention by calling the Synod for the Amazon, highlighting indigenous issues. It was useful for them to meet others from remote areas.  We can all feel overwhelmed by problems but events like this really help people to understand they have shared experience and are stronger together.  They heard of a success story in Brazil – where a community action prevented a large agro-business from taking over their land. And the papal nuncio, who is himself from an indigenous group [Nigerian Ebo], shared his experience of his people’s struggle for the right to education in their own language.”

“For me personally participating in the meeting was a humbling experience. It felt good to be enacting the principles of Catholic Social Teaching, and especially Laudato Si’, its newest addition, acting in solidarity with the poor.  But the people want the Church to be more involved in the struggle for the integral ecology of  the Amazon region; we have responsibility to respond to that call. They expressed great hope and joy that Pope Francis was listening to indigenous people, and they trust that the papal nuncio, as well as Mauricio and his REPAM colleagues, will take their message straight to the pope.”

At the conclusion of the meeting the people presented two carved Amazon river fish, meant to represent the two fish of the feeding of the five thousand, to be delivered by the nuncio to Pope Francis as a token of the gratitude of the people for his interest in them.

REPAM ethnographers have been listening to and recording the consultations in Guyana and around the Amazonian region.  They will contribute to a report for the bishops - Instrumentum Laborum - in May 2019, four months ahead of the Synod.  We can look forward to hearing directly from Mauricio Lopez of REPAM during his visit to the UK in May. 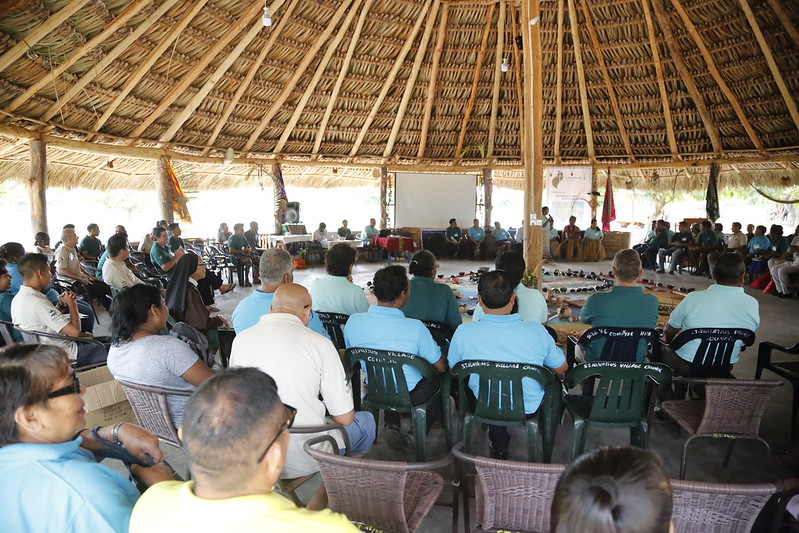