The unveiling of a memorial for seven Jesuit martyrs at St Giles-in-the-Fields marked a true ecumenical moment. On Sunday 20th January, friends and representatives of the Catholic community and of the wider church gathered together with members of the Anglican community at the West End parish for a choral evening prayer and the dedication by Fr Dominic Robinson SJ, parish priest of Farm Street, of the commemorative plaque.

“We don’t come to faith from a vacuum, but rather from a tradition” Reverend Alan Carr, Rector of St Giles-in-the-Fields, said in his introduction to the service. With events like these, occurring particularly during the Week of Prayer for Christian Unity, the congregation has the opportunity to give thanks for the progress made as people explore differences in faith, recognising a shared path. The memorial reminds us of moment in the past we wish had never happened: by recognising those who sacrificed their lives for the Truth, we look at the past to build a better future together.

The Venerable Luke Miller, Archdeacon of London, and Bishop Paul McAleenan, Bishop of the Diocese of Westminster, were present at the service. The Mount Street Jesuit community, St Patrick’s Soho Square and St Giles-in-the-Fields have worked closely on this project and shared the cost.

In his sermon inspired by this verse from the First Letter to the Corinthians, the Venerable Luke Miller briefly traced the history of the burial of the seven Jesuits. King Charles II spared these priests, victims of the ‘Titus Oates Affair’, other wise known as the Popish Plot, the agonies of drawing and quartering. Rather he gave order that they were to be hanged until death andburied in consecrated ground. The parish of St Giles-in-the-Fields was chosen for its proximity to the mansions of the Earl of Shaftesbury and the Earl of Pembroke, suspects of being the real perpetrator of the murder for which the Jesuits were condemned.

“They were arrested because of the life they led. Because they were Catholics. They lived the faith because they believed it – as the prayer book puts it – unfeignedly” said the Ven. Miller. “In England we are freer than many, perhaps most, Christians to speak out. Do we use that freedom?” The Archdeacon of London concluded by inviting the congregation to pray “that we may like [the saints and blessed] have courage to cling to the foolishness of God, which is Christ, and so come with them to the blessed company of all the saints.”

The St Giles Choir, directed by Jonathan Bunney and accompanied by Iestyn Evans at the organ, performed some beautiful hymns, sung the Psalm 119, and the prayers, including the Magnificat and the Lord’s Prayer.

A short procession followed the end of the service, to gather at the north door of the church where Fr Dominic Robinson SJ unveiled the memorial, a plaque made from Portland Stone, designed and cut by Philip Surey.“This is a true ecumenical moment, and it is an honour for me to be here and be able to unveil this memorial today,” said Fr Dominic. After the dedication of the plaque, he recited a prayer of blessing.

Canon Alexander Sherbrooke, parish priest of St Patrick’s in Soho, and Fr Thomas McCoog SJ, former Archivist at Jesuits in Britain and currently in New York, who have been involved in the project since its beginning, joined the other representatives for a final photo.

Remember
before God
the lives of all those
laid to rest in this churchyard
and among them those priests who died
for the Catholic faith at Tyburn and were buried here
including, in 1679, the Jesuits
William Barrow, John Fenwick
John Gavan, William Ireland
Anthony Turner and Thomas Whitbread
and, in 1681, Oliver Plunkett
(remains transferred elsewhere, 1863) 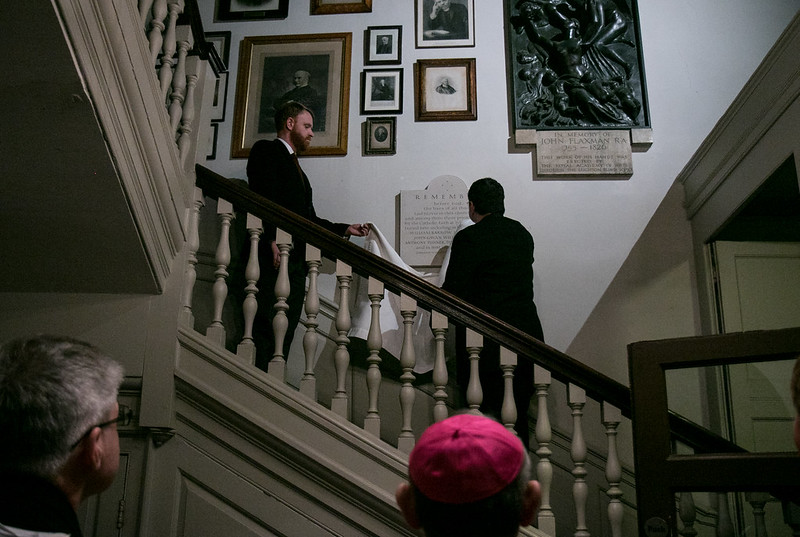