Ordinations: a day of joy and celebration

Laying on of hands

Saturday 30th June was a day of great joy and celebration for the Jesuits in Britain. Bishop Nicholas Hudson ordained two British Jesuits - Kensy Joseph SJ and Philip Harrison SJ  - at St Ignatius Church Stamford Hill before a large congregation of friends, family and parishioners, and alongside over fifty concelebrating priests.

There were smiles everywhere as well as a few tears of joy, gratitude, and possibly relief.

In the congregation were colleagues from Jesuit Missions and Jesuit Refugee service where Kensy and Philip have served during their formation, as well as fellow students, and all the current novices and scholastics. Many had travelled long distances to be there, in particular members of Kensy’s family who had come from India.

Kensy and Philip joined the novitiate in Birmingham together in 2007 and were ordained deacons last year.

In his homily Bishop Hudson recalled the influence of the Jesuits on his early life in Wimbledon: “I was always struck by the number of priests one met, many more than you would ever get to know in a secular parish. I found it a huge enrichment to see so many different ways of modelling priesthood; and felt the call to priesthood deepen in me through witnessing this diversity of ministries among you. As one Jesuit said to me recently, “You meet one Jesuit and you’ve met one Jesuit.”

The theme of the Liturgy, through scripture chosen by Kensy and Philip, was the good shepherd. Bishop Hudson reflected on this theme, reminding all present of Pope Francis’ call to priests the have the courage to walk with those who walk away from the church, to go and fetch the lost sheep.

He observed that the priests who are best remembered are not necessarily the most able but the ones who take most interest in the lives of their flock: “what matters is not so much what we achieve as what’s in our heartl”, he told Kensy and Philip.

Bishop Hudson reflected on the need for humility in priestly ministry, referring to Cardinal Hume’s advice to young priests – that criticism is a chance to thank God for humility.

In conclusion Bishop Hudson recalled his meeting with Kensy and Philip, to prepare for the ordination.  They had asked him what he believed the Society of Jesus could do for the Church.  His answer: “Your radical witness to poverty, community, chastity. And also your marvellous variety. By which I mean the extraordinary variety of ministries and apostolates through which Jesuits commit themselves to mission.”

Perhaps the most moving part of the ceremony was when, after the anointing and the laying on of hands by the Bishop, all the concelebrating priests were invited to come forward and lay hands on the new ordinands.

“The most ancient gesture associated with the liturgy of ordination is the laying on of hands. Through it the Bishop connects us with all the priests and Bishops who have come before us marked by the same faith. That was a truly special moment for me,” Philip reflected afterwards.

It takes many people to make a good priest

Another lovely moment was the vesting, when two people close to the ordinand help him don his priestly vestments – the stole and cotter.  Along with family members two Jesuits who were contemporaries of Philip and Kensy at the noviciate, Wouter Blesgraaf SJ and Eddie Cosgrove SJ helped with the vesting.  Both Eddie and Wouter were ordained last year.  “It’s great to celebrate something so important in our lives and the life of the Church” Eddie commented.

“There was a tremendous sense of the loving support of friends, family and people who have known us for many years for which we are both very grateful,” commented Kensy, who gave the vote of thanks at the end of the service.

The mass was beautifully sung by three choirs. The St Ignatius Choir and the Caribbean Choir welcomed the Choir from the Most Holy Trinity in Southwark, where Philip has been serving as deacon for the last six months.
After mass many people queued to receive a blessing from the new priests.

Philip observed, “It takes many people to make a good priest: people to teach us, people to challenge us, people to listen to us. Many of those who have formed us in our vocations were here today. We pray that you continue to encourage many more young people in the same way.”

Kensy was born in Kuwait of Indian parents. After graduating in Computer Science and Engineering, he worked in management consulting before moving to the UK to join the financial service industry.  After two years in the novitiate made his First Vows in 2009.  He studied Philosophy at Heythrop and in Pune, India, and took his Bachelor of Divinity at Heythrop in 2016.  During his two-year regency he taught Religion, Philosophy and Maths in Limerick, Ireland.  He is currently completing an MA in Religions and Theology at Manchester University, and has been a member of the Manchester Universities’ chaplaincy team since August 2016.  His next ministry will be as chaplain to St Aloysius College in Glasgow.  Headteacher of St Aloysius, Matthew Barrett, had travelled to London to the ordination and commented “we are really looking forward to have Kensy join us in Glasgow, and it is a great privilege to help celebrate his ordination.”

Philip was born in Bristol. He studied English at Leeds University before working as a full -time volunteer with homeless people and people with learning disabilities, as a member of the Jesuit Volunteer Community.  He joined the novitiate in 2007.  He studied Philosophy at Heythrop College before training as a secondary school teacher in Edinburgh.  He took his Theology degree in Columbia, where he also did pastoral work.  Since his diaconate ordination last November he has been serving as deacon in an East London parish and working with Jesuit Refugee Service.  Philip’s next mission will be to study at the Biblicum in Rome. 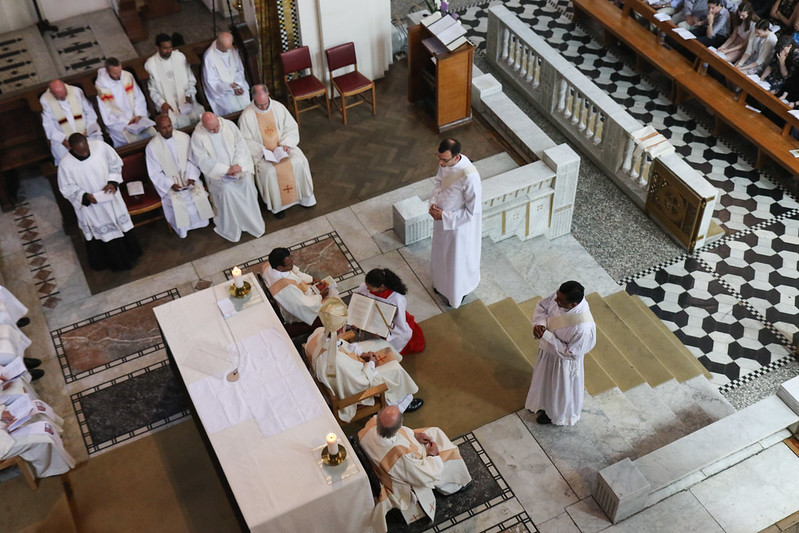