"A place to lay His head" Nuncio blesses Homeless Jesus

"A symbol of how we should let the stranger, and the least in our community, inside our hearts”.

These were the words of the sculptor Timothy Schmalz on the occasion of the formal blessing of his life-size bronze statue Homeless Jesus, by Archbishop Edward Adams, Apostolic Nuncio to Great Britain, at Farm Street Jesuit Church on Tuesday.

Archbishop Adams celebrated a solemn mass with Bishop Nicholas Hudson, Auxiliary Bishop of Westminster, Monsignor Keith Newton of the Ordinariate of Our Lady of Walsingham, parish priest Fr Dominic Robinson SJ, and Jesuits of the British Province. Fr Alan Pigott of Grosvenor Chapel, Fr Tim Vickers of the Diocese of St Albans and Cllr Ian Adams, Deputy Lord Mayor of Westminster (also with Council cabinet brief for homelessness) were all made welcome by Fr Dominic.

Timothy Schmalz is acclaimed for his large scale visual translations of Gospel messages – “I am devoted to creating work that glorifies Christ, to creating visual prayers” he says. His work can be seen in public spaces and churches across the globe. The first Homeless Jesus was installed at the Jesuit Regis College in his native Canada in 2013, and another was famously welcomed to a prominent position in the Vatican by Pope Francis in 2016. There are copies in Glasgow, Manchester and Dublin, but Farm Street’s statue is the first Homeless Jesus in London.

“The Homeless Jesus in London spent years trying to find a place to lay his head,” observed Tim Schmalz in a letter read out after the service by Fr Dominic.  Referring to a denial of planning permission submitted by Methodist Central Hall, he continued, “the same streets that were closed to Him are open to statues of politicians, abstract art and visual puns continually planted in your city; but this work that challenges us to see the Holy in the least in our community was not allowed outside. You brought Him inside. You welcomed Him, giving Him a beautiful permanent spot in the centre of the city.”

Farm Street Church is the perfect location in the centre of London for Homeless Jesus because the parish ministers to homeless people in very practical ways.   Firstly, for the last four years the parish has been an active member of a consortium of faith organisations who provide food and accommodation to street homeless people for eight months of the year.  Parish administrator and project co-ordinator Scott McCombe explains: “Here at Farm Street we host fifteen homeless people on Monday nights during four months of the year.  Volunteers from the parish have organised a rota for setting up the church hall, welcoming the guests, eating a hot meal with them, tidying up and setting up the hall as a dormitory.”
Secondly, the Farm Street St Vincent de Paul Society (SVP) sees a large crowd of volunteers, led by president Yasko Kurahachi,  go out onto the streets of central London every Monday evening to bring food and friendship to the many street homeless in the neighbourhood.  In addition, the SVP, co-ordinated by parishioner Sandra McNally, makes a number of home visits to those living alone.
The theme of welcoming the stranger was taken up by the homilist Fr Paul O’Reilly SJ, who is a GP in practice at the Cardinal Hume Centre for homeless people. “I am glad that the Homeless Jesus has at last found what so many of my patients also have great difficulty in achieving – permanent accommodation in Westminster,” he said, and told the story of encountering one of his patients taking a nap at Farm St Church recently. “Let us pray that ..this Church may forever be a place where anyone can come and have a prayer and have a nap and know that they will never be laughed at,” he concluded.

Fr Dominic commented on the synergy of the Holy Father’s welcome of Homeless Jesus in Rome, and the participation of his representative in Britain in the blessing ceremony in London.  He said, “we share in the compassion and sorrow of Our Lady at the altar of the Seven Dolours [where the statue is located], we pass the statue every time we come to the church, every time we receive Holy Communion, we pass Him who embodies a call to greater faith, a call to action.”

Echoing this call to action, the service concluded with talks from George O’Neill, Chief Executive of the Cardinal Hume Centre, and Sarah Teather, Director of Jesuit Refugee Service. Both charities accompany and serve homeless and destitute people in London, and both George and Sarah bore witness to the many ways in which they find the hope of Christ in the people they accompany. “Christ was born to a young migrant family”, George reminded everyone, “we should look for hope, not in power structures and wealth but in the charities working with the least.. in a stable in Bethlehem or under a blanket on a park bench”. Sarah observed “getting to know the people we accompany is a gift and a privilege.. to see their strength and resilience is inspiring and profoundly faithful.  Divinity is revealed through human struggle.”

Almighty everlasting God, who does not forbid us to carve or paint your likenesses, in order that whenever we look at them with our bodily eyes we may call to mind your holiness, and resolve to follow footsteps of your beloved Son, who ministered to all, especially the poor and destitute; may it please you to bless + and to hallow + this which has been made in memory and honour of your only-begotten Son, our Lord Jesus Christ. And grant that all who in its presence pay devout homage to your only-begotten Son may by His merits obtain your grace in this life and everlasting glory in the life to come. Keep us mindful of all those in need, and inspire us to follow your example in giving ourselves in service to others; through Christ our Lord. 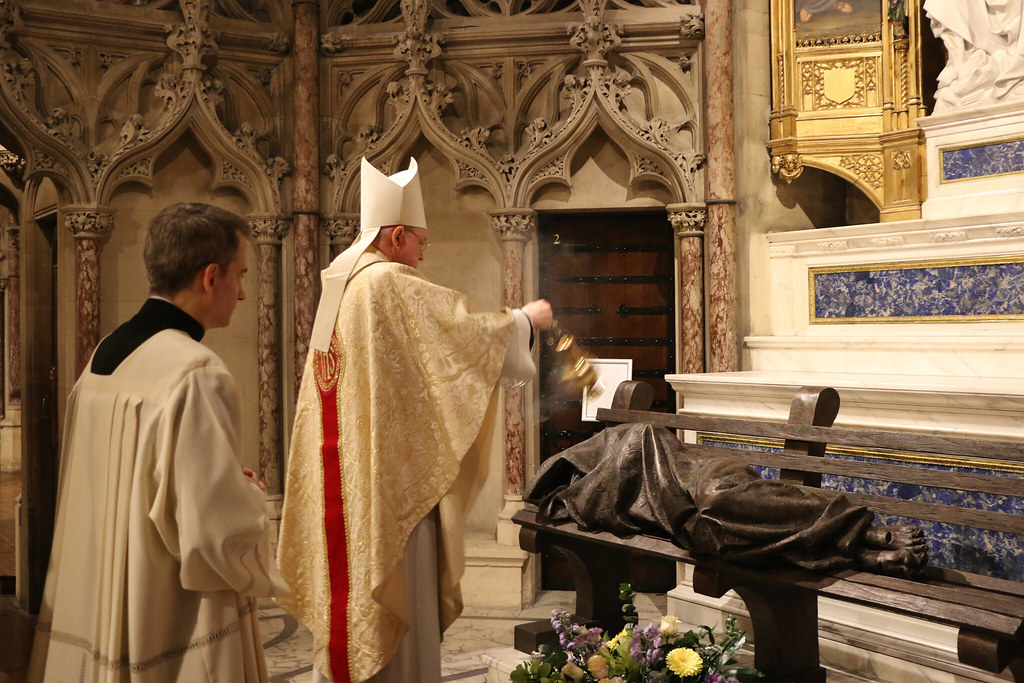