The relics have been brought to London from France by the Emmanuel Community as a Sacred Heart of Mercy Mission to conclude the Jubilee Year of Mercy.  The reliquaries, carried by Fr Benôit Guédas, Frederic De Narp, and other members of the Emmanuel Community, were welcomed at the church door by parish priest Fr Andrew Cameron-Mowat SJ.  The congregation completed the novena prayer which had been prepared specially for the mission.

The Farm Street Choir sang the Emmanuel Community Mass setting with hymns from the seventeenth century which St Claude and St Margaret Mary would have found familiar: Rejoice the Lord Always of Purcell and O Sacrum Convivium of Charpentier (sung in French).

Bishop Wilson preached of the infinite love God has for us, how this can be experienced every day as we grow in relationship with Christ, and how this love finds particular expression in the beautiful devotion to the Sacred Heart of Jesus.  This devotion was renewed and re-interpreted by St Margaret Mary and St Claude who “joined their two human hearts with the heart of Christ in infinite love”.

Following Mass many of the congregation crowded into the church hall to hear a talk by Jan Graffius, Curator of Collections at Stonyhurst College.  Jan is an expert on martyrs’ relics and on devotions associated with them: the Stonyhurst Collection includes around 1000, the majority collected secretly during penal times.  Jan described how Claude, “an extremely sensitive and spiritual young man”, was the Jesuit priest handpicked by Pope Innocent XI as the best man for the risky and politically sensitive mission to the royal court of St James in the 1670s, where he was to minister to Catholic members of the royal family at a time of religious division, prejudice and conspiracy.  She described the background to the infamous Popish Plot which led to the deaths of nearly 60 British Jesuits, and the imprisonment of St Claude’s himself at the notorious Kings Bench gaol.  Although he was released on the intervention of King Louis XIV, his health had suffered so much he died shortly after his return to France at the age of only 41 in 1682.

Devotion, prayer and praise with the relics continued during an all-night vigil. 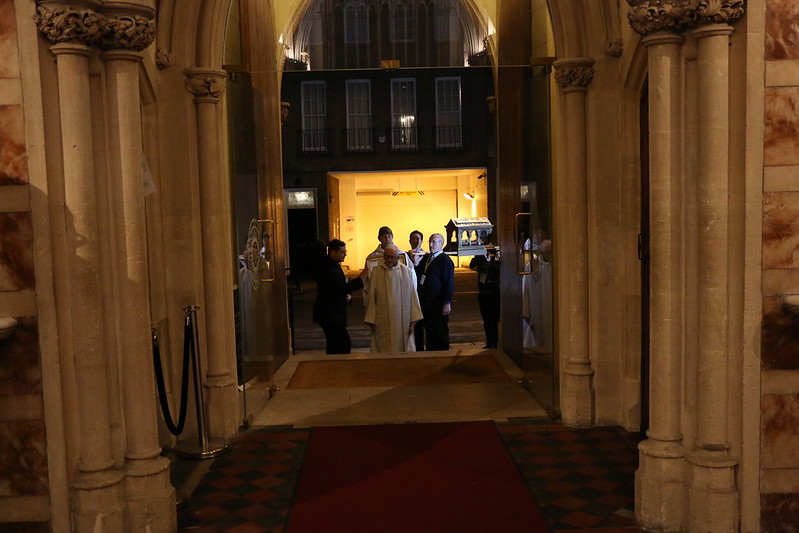