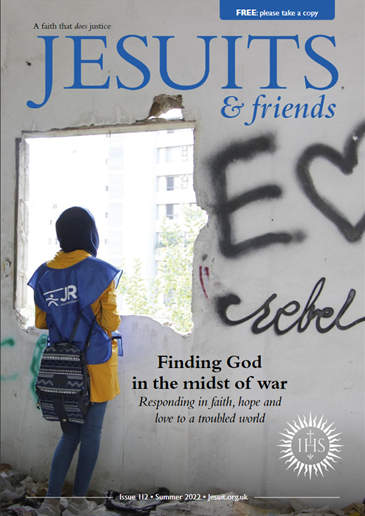 In this issue of Jesuits & Friends...

04 Military chaplain Andriy Zelinskyy SJ spoke to us about life on the frontline of the war in Ukraine.

06 Ukrainians displaced by the conflict are sadly not alone in their plight – JRS International supports refugees all over the world.

10 Jesuit schools have responded to the Ukraine crisis in prayerful and creative ways, as Lynn McWilliams discovers.

14 The Ignatian Year has enriched the life of the province, according to Ladislav Šulik SJ.

16 Where does Sophie Cartwright see an urgent need for reconciliation in Britain today?

18 It’s been an interesting few months to be an intern at the UN, as Harry Rawcliffe tells us.

20 Sophie Plumb sings the praises of a project supported by the Jesuit Fund for Social Justice.